My name is Yowan Barhoush. I am a 2 years old, Lebanese boy who was born and raised in Dubai.
I am very fortunate to be speaking 3 languages (English, Arabic and French) and playing 3 musical instruments, guitar, drums and piano. My love for acting, stand-up comedy, magic, music and painting led me to study some of them professionally, with reputable institutions such as Courtyard Playhouse and Brooklyn Melodies and my favorite tutor: YouTube.
Since I was very young, I started acting, singing and pulling magic tricks in public and private events.
My most recent acting job was with ADWAR in August 2020, when I took a lead role in an anti-bullying short film, written by young actors like me. The film aired at DUCTAC theatre at Mall of the Emirates; https://www.youtube.com/watch?v=rPdNYg1TxxI
In the same summer, I took a lead role in Dubai Performing Arts’ Mathilda musical, singing, acting and dancing.
In 2018, I was featured in Dubai Festival City promotional video, directed by Nayla El Khaja, playing an expat kids, in an outing to the facility with his parents https://www.naylaalkhaja.com/p_dfc

All along, I had many voice-over roles, starting with the Arabic version of Sesame Street when I was just 4 years old to other radio ads for leading brands such as Dettol and Kellog’s.
Modeling has also been part of my experience with catwalk fashion shows and still photography for high end fashion brands including Burberry, Polo Ralph Lauren, Roberto Cavalli to name just a few. 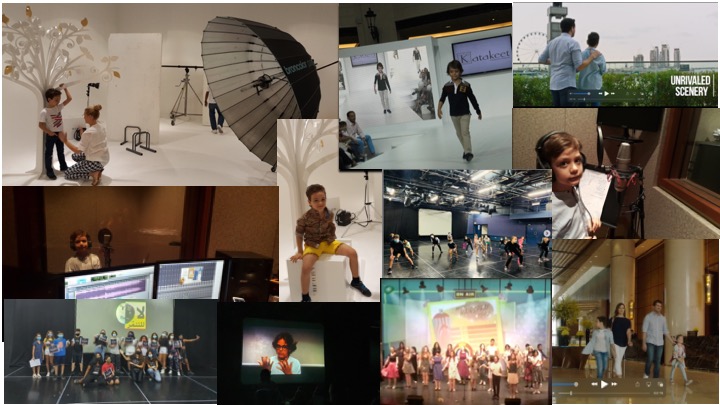